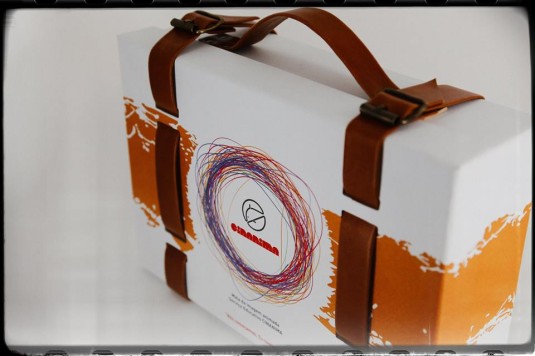 In November 2014, at the opening of the 38th edition of CINANIMA, the Educational Service of this Festival officially presented its “Moving Picture Suitcase”.

This product, long desired and planned by the CINANIMA Educational Service team, finally saw its production completed thanks to the dedicated involvement and exclusive sponsorship of Cartonagem Trindade, based in S. João da Madeira. The extensive experience of this company and the quality of its products, coupled with the desire of CINANIMA to take the animated image on a journey with the younger generation, gave birth to this Suitcase.

Now, ready and with the “Moving Picture Suitcase” packed, we can set out on a long journey that will bring optical toys and animation cinema to schools, families and youngsters, and also to all who want to share and experience this fantastic world of animation.

This journey through the world of optical toys began in 1825 when John Ayrton Paris invented the THAUMATROPE, a device that demonstrated the retinal persistence of images. It opened the way for other authors to create, during that decade and the next century, the PHENAKISTISCOPE (by Joseph Plateau) and the ZOOTROPE (by George Horner). These are three of the most important optical toys that at the beginning of the last quarter of the 19th century led Émile Reynaud to create the PRAXINOSCOPE, very similar to the Zootrope, except that the animated images are seen projected in small mirrors, and not by peeking through the open slits in a drum, as in the Zootrope.

This is the ambition of the Educational Service of CINANIMA: to create bridges that transmit to everyone the magic of the moving image and of animation cinema. The “Moving Picture Suitcase” carries all this magic wherever we want to go, and is a playful, and especially didactic and pedagogical means of creating audiences for animation cinema.

Included Contents:
– Support brochure with information on the principles of image animation;
– Optical toys: Thaumatrope, Folioscope, Phenakistiscope, Zootrope and Flipbook. All of these optical toys include black and white printed copies as examples, and blank copies for creating your own. The suitcase also includes the Zootrope drum.

– € 20 (Twenty Euros): If purchased at the official CINANIMA vendors in Espinho (price per unit).
– € 27.50 (Twenty-seven euros and fifty cents): If you want the suitcase to be shipped via CTT by registered mail (price per unit). Prices valid for mainland Portugal and Islands (Madeira and Azores).